Let’s be honest, we all have antagonists,opponents, bullies and abusers who appear in our lives from time to time and give us a run for our money. In a previous existence, when my career was predominately customer service and hospitality, I found myself at the mercy of a particularly hostile and aggressive manager. We will call her Fran, for simplicity’s sake. Fran had an uncanny ability to terrify and upset staff to and was skilled at creating an ambiance of tension and division. She

would bark orders, micro manage, intimidate and dominate all who came into her sights with impressive regularity. She was hostile, unpleasant, angry and tense. When working with her the atmosphere was one of tyranny and oppression which led to many hurried and covert ‘bitching sessions’ within the ranks of disgruntled employees, myself included. The “I can’t believe Fran…. (insert mean or scathing act/comment), was the general focus of conversation.

One day, I had enough. I had wasted my precious coffee break listening to staff banging on about the awfulness of Fran and waxing lyrical their deep dislike and disrespect. It felt wrong and unnecessary but more importantly, I felt disheartened that the agreed status-quo in our work environment harboured such a pervasive sense of powerlessness. I put down my cup, stood up and marched down the corridor to find the dragon and have my say.

Fran was in her usual dark state and so I pulled out the big guns. I took her to one side and asked her if she was ok. As it turns out, she wasn’t. She was going through some major ‘stuff’. Her life had taken a turn for the worse and she was struggling. Big time. She broke down as she discussed her personal problems and even asked if I would join her for dinner that night. Go figure!

Now, you might be saying to yourself this is all very well, most problems don’t resolve themselves as easily and most ‘horrible bosses’ are just plain mean and unapproachable. You may well be right, but what have you got to lose? In the odd instance where you come across a fellow traveler who despite appearances to the contrary, actually needs an ear and not an adversary, a friend and not a foe, perhaps that person could be you. 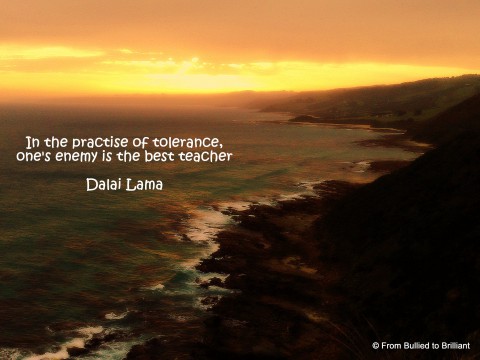 If you dig a bit deeper into the bully/victim dynamic, the description of workplace bullying and covert bullying highlights the problem with failing to address the issue when faced with an overly assertive or vocal colleague:

The line between bully and victim is far more blurred than one would imagine. It is easy in group situations for the victim/s to not only add to the hostilities but to turn the tables and inadvertently become abusive in an entirely different way. From the prevalence of bullying globally, not only does it seem that we have forgotten how to manage conflict effectively and assertively in our homes, schools and workplaces, we also seem to be unable to distinguish between appropriate and inappropriate responses.

As the great leader Mahatma Gandhi once said,

“In the practice of tolerance, one’s enemy is the best teacher”

I’m wondering if the world is finally ready for a more compassionate approach to conflict and hostility.