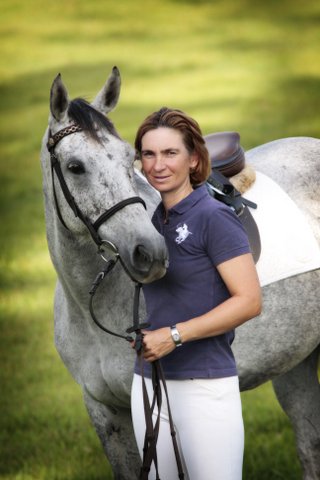 Tanja Mitton grew up in Germany and has a passion for horses and riders. She worked and trained with a number of elite German and Austrian show jumping riders before meeting her husband Richard and moving to Australia in 1995.

While building her riding coaching business, Tanja was fascinated that many riders displayed a lack of confidence and belief in their own ability. Tanja discovered a solution to this problem in her study of Neuro-Linguistic Programming (NLP).

Now a NLP Master Coach and Practitioner, Tanja combines her unique riding instruction and NLP techniques to coach riders from Pony Club and Adult Riding to the elite level.

Tanja is the author of ‘The 7 Steps To the Mindset of An Equestrian Champion’, she also has her articles regularly published in Horse Deals Magazine, Local Horse Magazine, has been one of the Educators at Equitana in 2010, 2011, 2013, 2014 and was the guest speaker at the prestige’s Garryowen luncheon at Royal Melbourne Show.

In 2012 Tanja was invited to the Australian Institute of Sport to present to the NCAS Level 3 candidates a workshop on how to improve the mindset of Equestrian Champions.

Since 2014 Tanja is the Mindset Coach for the Australian High Performance Dressage and Para Squad as well as coaching with the NSW State Vaulting Squad. www.tanjamitton.com