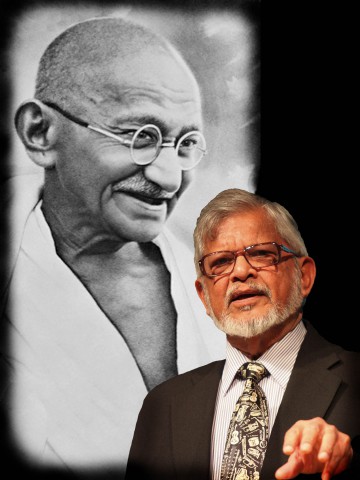 Dr. Arun Gandhi is the President of the Gandhi Worldwide Education Institute, USA and leader of the Gandhi Legacy Tour of India. Born in 1934 in Durban, South Africa, Arun is the fifth grandson of India’s legendary leader, Mohandas K. “Mahatma” Gandhi. Growing up under the discriminatory apartheid laws of South Africa, he was beaten by “white” South Africans for being too black and “black” South Africans for being too white; so, Arun sought eye-for-an-eye justice. However, he learned from his parents and grandparents that justice does not mean revenge, it means transforming the opponent through love and suffering.

Grandfather taught Arun to understand nonviolence through understanding violence. “If we know how much passive violence we perpetrate against one another we will understand why there is so much physical violence plaguing societies and the world,” Gandhi said. Through daily lessons, Arun says, he learned about violence and about anger.

Arun shares these lessons all around the world. For the past five years, he has participated in the Renaissance Weekend deliberations with President Clinton and other well-respected Rhodes Scholars. In recent years his engagements included speaking at the Chicago Children’s Museum and the Women’s Justice Center in Ann Arbor, Michigan. He also delivered talks at the Young President’s Organization in Mexico, the Trade Union Leaders’ Meeting in Milan, Italy, as well as the Peace and Justice Center in St. Louis, Missouri. Sometimes, his journeys take him even further. Arun has spoken in Croatia, France, Ireland, Holland, Lithuania, Nicaragua, China, Scotland and Japan.

Dr. Gandhi has worked closely with Christian priests and his philosophies are strongly influenced by Buddhist, Hindu, Muslim and Christian concepts. Like his grandfather, he also believes in the concept of ‘non-violence’ (Ahinsa). In 2003 he was one of the signatories to Humanism and Its Aspirations (Humanist Manifesto III).

Find out more about Dr. Arun Gandhi at www.gandhiforchildren.org and www.gandhitour.info